Mountainous villages surrounded by lush greenery, Byzantine monasteries, and breathtaking landscapes complete the picture of this charming island. Discover the top attractions of Kefalonia and make your vacation unforgettable.

The Castle of Assos 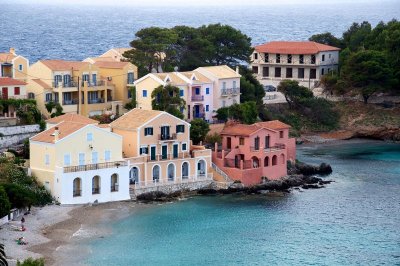 The castle of Assos was built by the Venetian conquerors at the end of the 15th century, who, seeing the special position of the peninsula, which joins the rest of the island with only a thin strip of land, decided that it is a unique place to build a castle that would protect the island from possible attacks.

During your visit, you can also see the residence of the Venetian ruler, barracks that later served as prisons, and the church of Profitis Ilias built on the ruins of an older temple.

The Cave of Melissani The Cave of Melissani is one of the rarest geological phenomena in the world. It is located 2 km northwest of Sami , in Karavomylos .The natural entrance to the cave is vertical and was created by the collapse of a part of the rock, possibly by an earthquake.

The cave is 20 meters below the earth's surface and has a depth of 10 to 40 meters. Stalactites that adorn the cave, form strange, unique shapes and have been there for about 20,000 years. As incredible as it sounds in the middle of the lake there is an island.

Various elements of worship of the god Panas were found there, a fact that confirms that this cave was a sacred place and place of worship during prehistoric times. The Cave of Melissani was discovered in 1951 by the speleologist Ioannis Petroheilos.

It is said that the cave took its name either from the myth of the nymph Melissanthi who committed suicide there because the god Panas rejected her, or from the traditional version that a shepherdess Melissanthi lost a sheep and while looking for it stumbled and fell into the lake. 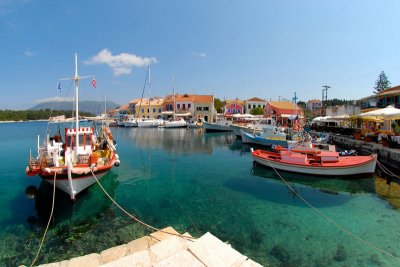 You’ll then proceed to the picturesque little port of Fiskardo located on the north east tip of the island.

It is the only village to have survived the 1953 earthquake and the Venetian’s architecture is in rich evidence.

Then rejoin your buses for the return journey to Argostoli and your ship. 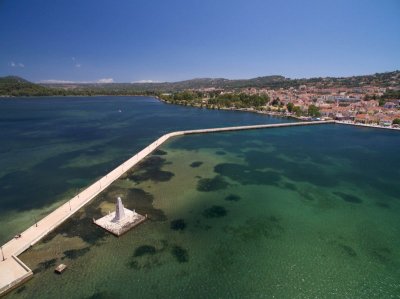 The Bridge of Devoseto is a large stone bridge built in 1813 over the gulf of Argostoli. In fact, it is the largest stone bridge in the world with a length of about half a kilometer.

The bridge was built in 1813, at the urging of the Swiss engineer and then governor of the island Charles de Bosset, hence its name Devoseto.

The middle of the bridge is adorned with a pyramidal monument dedicated to the constructors. Until the bridge was built, it was necessary to cross the Koutavos lagoon in order to leave the city of Argostoli.

This process was obviously time consuming and quite dangerous from a health and sanitary point of view, due to various diseases that occurred in the swampy waters and were transmitted mainly by mosquitoes.

The Castle of Saint George One of the most important and famous sights is built on a peak in Peratata, just outside Argostoli. The castle that dates from the 12th century AD was built by Byzantine Emperors, while later the Venetian conquerors, formed it with various interventions and remained the capital of Kefalonia until 1757.

The castle extends to 16 acres and its walls have a perimeter of 600 meters. The castle took its name from the old church of Agios Georgios at the top of the hill.

Today, visitors have the opportunity to visit the outer walls of the castle, built in 1504 and many buildings of the same period. It is also worth seeing the French bridge that connected the walls inside.

In the village (borgo) of the castle you will find the church of Evangelistria, which is a typical example of a building in the form of Ionian Baroque. Some historical sources refer to the existence of an underground tunnel that connects the castle with the city of Argostoli, but archaeological researches have not yet discovered such a thing. 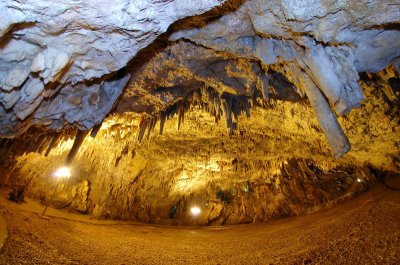 Drogarati Cave is located just 3 km away from Sami. The thing that makes this cave unique in all of Greece is that it is the only cave where concerts are organized regularly.

Its central part is very large, reaching a height of 20 meters, while its acoustics are fantastic, which makes it ideal for concerts.

From a geological point of view which is worth mentioning since we are dealing with a cave, the natural creations of the cave called stalactites and stalagmites have existed for half a million years. The temperature does not exceed 18 degrees Celsius, while its depth reaches 95 meters.

Chronologically and historically speaking, the cave was discovered about 300 years ago, due to a large earthquake. The cave has been explored by the Hellenic Speleological Society and since 1963 it is open to the public all year round.

The Robola of Kefalonia 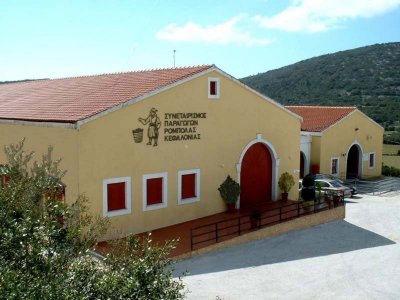 There is no way you can be on the island and not try a glass of the famous local Robola wine. It is a special white wine with a lemon hue, special acidity in taste and citrus aroma. It is usually consumed two years after its production, which further enhances its aroma.

This is an area of about 3,500 acres on the plateau of Omala, near the Monastery of Agios Gerasimos, where there is the Agricultural Cooperative of Producers of Robola.

There you have the opportunity to visit the cooperative winery and learn from experts about how to produce and bottle the wine. You can also buy bottles of wine if you want.

The word "robola" probably comes from the Greek word "remvi" which the Ancient Greeks considered as a result of drunkenness.

The Roman Villa of Skala 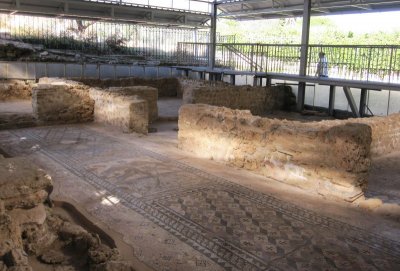 A rural Roman Villa from the 2nd century AD was discovered by archaeologists in 1957 and now it is the most important monument of that time in Kefalonia.

It is located in the village of Skala near the beach.

Four of the rooms are adorned with colourful, mosaic floors, decorated with geometric motifs of special artistry. 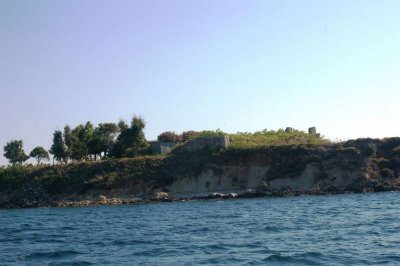 The island of Vardianoi is located in the south of the Paliki peninsula. It consists of an elongated part to the east and wider to the west. According to one version, the name is of Italian origin from the Italian word "guardia" which means guard, and the island is considered to stand as a natural fortress of the bay of "Livadi".

In 1824, an imposing lighthouse was built in the middle of the island, at the narrowest point towards the opening of Livadi Bay, by order of the Englishman Charles Napier. At a height of 25meters, it is consisted of a cylindrical tower and a side house for keepers.

The tower was destroyed by Italian bombing in 1942 and completely demolished by the devastating earthquake of 1953. Today in its place stands a much smaller lighthouse that serves the passing vessels. There were also two monasteries on the island, Agios Nikolaos and Evangelistria.

Today only their ruins are left, but you can visit them.

The island of Zeus 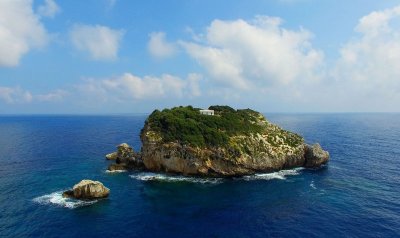 To the south of Livathos, stands the islet of Zeus. At the top of the rock is the small church of Panagia Diotissa, which is celebrated every year by the faithful on July 2.

On the islet you can see ruins of the ancient temple that was dedicated to Zeus, whence the name of the island.

Kefalonia is undoubtedly a magical multidimensional island that will not leave you unmoved.

Apart from the beautiful beaches that are ranked among the top beaches in Greece, but also in the world, there are countless places and landscapes hidden scattered on the island.